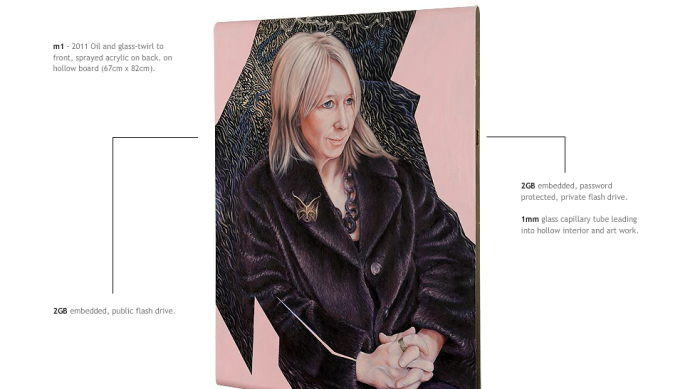 At first glance, Russell Rukin is a portrait painter – an excellent portrait painter, in fact. In each of his works, he carefully captures the expression of the model, evoking different feelings within each painting. However, there’s often more to his work than meets the eye.

No part of the canvas goes unused. In m1, he also painted a back work, completely hidden when looking at the portrait on the front. And in each guilded side, he placed a flash drive: one public flash drive & one password-protected flash drive. There’s also a 1mm glass capillary tube inserted into the side of the work, leading to a third artwork stored in the hollow interior, as well as the DNA of the sitter. “My works meld the interests of my sitters with my own,” Rukin says of his art. “I try to explore the world through their eyes and then test the reverse and imagine they are turning over issues that interest me.”

Recently, Rukin has been focused on cryptocurrency, both as subject matter and as a payment method for those interested in buying his art. The piece on the back of h1 is a digital limited edition print that is encoded and editioned from the blockchain. Again, a viewer couldn’t guess this by looking at the portrait on the front of the work, nor can a viewer see the third artwork encased between the other two pieces. In this way, Rukin has effectively combined his interests and the sitter’s interests to create artwork that explores changing shifts in technology and the impacts on society. Rukin accepts Bitcoin for all of his work.

Cryptocurrencies and the unfolding and rise of structures that could compete with the vast financial sector and even governments are hot topics for my mind at the moment.

Emily Braun: How did you first hear about Bitcoin? What aspects of it interested you the most?

Russell Rukin: I remember reading on some internet forum about a currency that could be mined on your computer. I don’t recall the forum or the date, but I remember miners complaining that these were the last days of mining with a CPU, as GPU’s would be the only way to go soon. I thought I should really sit down and have a go with mining. It sounded like making money from nothing… and then I never got around to it. As with many people, it was sheer lazy greed that interested me about Bitcoin. Back in the day, I failed to see its most amazing qualities. These I would only discover later.

Braun: According to the About page on your website, a lot of your work deals with rapid technological change. How do changing technologies impact you as an artist?

Rukin: Technological change has massively impacted art theory and practice. I think its role has been underplayed by art historians of past decades. My own work is enthused by those that work at the cliff face of new technology, the free thinkers and the experimenters. A cryptocurrency like Bitcoin may be a few years from its bleeding edge, but its novelty and its importance mean that its most drastic societal changes have yet to be felt. I experiment with all the tools that technology gives me as an artist, but its really how those technologies impact society that excites me. 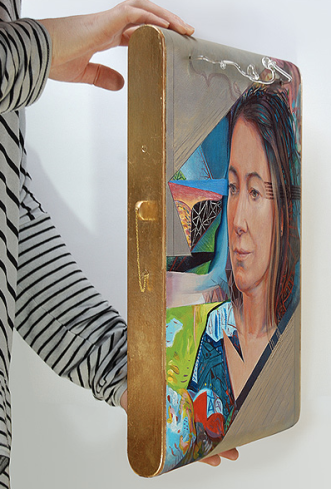 Braun: What benefits do Bitcoin & blockchain technology bring to society as a whole? What about specific benefits for artists?

Rukin: Where to begin? Perhaps you need to think of those that would not like to see Bitcoin and its immutable blockchain succeed in its present form. Many would cite the bankers, but for me, it is the politicians who have forgotten that citizens are not just people who put an x in a box every few years. Could Bitcoin allow a double-bite of the democracy cherry for society? Programmable taxes allowing the voter back into the political process?

Specifically, artists have had an uneasy relationship with money. Either we are starving in our garrets (or in the box room of a friend’s house), our work mainly unseen, or we are displayed by our patrons in front of the ‘right’ crowd, quaffing wine at a private viewing. The blockchain offers artists control over digital content rights and the ability to accept payment at any time, from anyone they choose in the world.

Braun: How do you incorporate themes related to cryptocurrency into your artwork? Why does it appeal to you as subject matter?

Rukin: Since 2004, I’ve been investigating futuristic research and the social shifts & disruptions those technologies might bring. Learning about Bitcoin and the blockchain has been a new key element in my work. It has been enlightening to discover how our world actually operates financially. This is something I feel I would never have done without understanding Bitcoin first. Could the Bitcoin blockchain help ease the rapid technological wrecking ball of change threatening our stable societies?

Bitcoin is now incorporated into my work directly (I’m just about to start a series of works based on some of the leading lights in the field), but it is also a natural fit with my pre-existing work. I craft my work to be at once an easily digestible painted/drawn version of reality, and on the other, deliberately hidden and obscure, revealed only by sharing secrets with those willing to go further into my work. Bitcoin is both yin and yang technology – at one end open with its worldwide ledger, and at the other, closed and obscured with its privacy and its hidden genius inventor.

Rukin: As I’ve mentioned, I believe Bitcoin and the blockchain could help us ameliorate the moving technological shift. Blogging and online media taking away that comfy journalistic position? Downloads stealing your paying audience as a musician? Let the blockchain and micropayments remove the middlemen and re-interface with your audience! In developed societies, we may start to earn less in this micropayment future, but those people who used to make your cheaply bought goods will be earning more. You will hopefully not feel as powerless and ignored in this future. You’ll know exactly where your intelligent tax-bits go. You can be ‘blockchain-assured’ that nothing is wasted or misappropriated. It will all be spent with your knowledge and your personal rubber stamp. It may even become the basis for a standard basic world income, allowing larger percentages of the population to move out of the menial jobs taken by automation and into working for pleasure.

Braun: Have you ever sold any of your artwork for Bitcoin? Why might someone want to purchase artwork with Bitcoin rather than another currency?

Rukin: I’ve only just started to offer my works in Bitcoin, so no bites yet. That said, buyers who have bought my work now own Bitcoin, so it could happen soon! Buying yourself a slice of Bitcoin and spending it on work like mine is a political act. It’s not about losing those percentage fees that Visa or MasterCard charge or even the fact that you know you’re paying me & not an agent or a gallery. It is rather a small vote away from the world of fake balance sheet bankers, uncreative middlemen, and lip-service politicians. It is a vote for openness, an unmediated market that leaves no one out, and truth guaranteed by a blockchain that can never be rewritten.

Braun: Have you ever bought anything with Bitcoin?

Rukin: Yes, although like many at the moment, it was a roundabout way of using my Bitcoin and having it converted into fiat at some stage in its journey. With Purse.io, I can buy from Amazon, and with my E-Coin Visa card I can buy… anything! It’s OpenBazaar I’m really looking forward to, though. No more eBay and PayPal, because I’m buying direct with Bitcoin. No need to change into fiat money again.

Braun: Why are you interested in alternate applications of blockchain technology? What are some specific applications that you’re excited about?

Rukin: I’ve recently been in Kenya, and I was blown away by the cradle of humanity and the scenes of rich wildlife. What I didn’t expect was the amount and usage of leapfrog technologies that are transforming Kenya. Everyone has a mobile phone. Coverage is amazing. Is that a ring tone I hear out on our ten-mile trek across the Rift Valley? Yes, it’s our Maasai warrior guide’s phone! Digital currency is already here. This is a world where M-Pesa signs are hand-painted on every village mud hut shop. No access to a bank account? No problem with M-Pesa! Bill Gates supported M-Pesa for these empowering traits, but he now sees that M-Pesa is still linked with big banking and understands that Bitcoin is going to be the one to back now.

I visited a great project run by a very formidable Maasai woman called Helen. She had set up a village for divorced women. Divorced women cannot remarry in Maasai culture, and without a husband to support her, a woman will face massive hardship, as women cannot own property. Helen set up a sewing shop so the women could earn money selling bags and trinkets to tourists like me.

Now let’s imagine Kenya with a sprinkle of the best of Bitcoin. 21.inc is a heavily-funded big hitter wanting to take Bitcoin mainstream. At some point, its partner Qualcomm will produce a ubiquitous chip that will mine Bitcoin in your mobile phone. It will help secure a distributed network and crucially allow access to a world of content that can be paid for by the Bitcoin it mines. It will be both an access point to this world and a till/point of sale for producers wanting to charge for work and services. With a 21.inc phone, someone can have all the benefits of M-Pesa with the advanced free features of Bitcoin. I could buy a product direct from that person. I could ask them to take me on a walk in the Rift Valley while showing me the sights streamed via that persons mobile. I would of course micropay for the time they take doing this for me.

Braun: What challenges do Bitcoin & blockchain technology face going forward? And what needs to be done to overcome these challenges?

Rukin: Bitcoin has faced a withering wall of indifference for years. Now, that indifference has woken up to Bitcoin and its blockchain threatening entrenched business models. Governments think they will be able to tame this newcomer or back a more easily controlled successor. The banks are in full copy mode with the upcoming R3 blockchain. I would say that a sensible politician and banker would see the game is up! Put your energy into working with a network that dwarfs the world’s top 500 supercomputers and knocks the mighty Google’s computing power into a cocked hat. Bitcoin’s blockchain is verifiably the best horse to back in town!